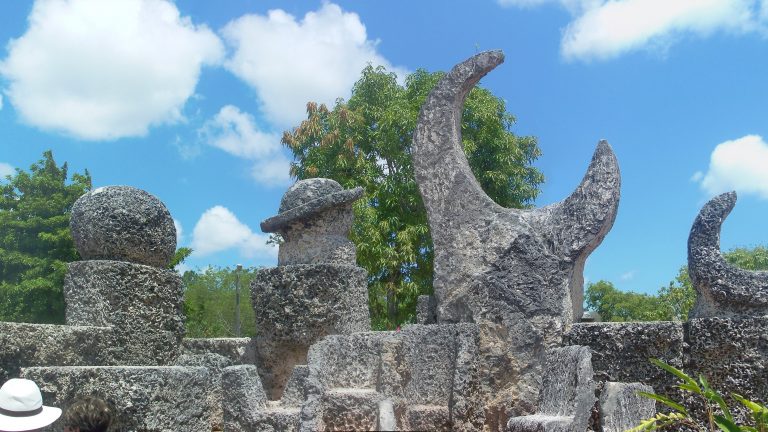 See that luminescent bouquet of soon-to-be wilting roses you have in your hand that you’re about to proudly present to your life’s love as a token of your adoration for them? Don’t be surprised if you’re greeted with rolled eyes and an unimpressed smirk if you’ve both just finished a tour of Homestead, Florida’s Coral Castle and its 1,100 tons of sculpted oolitic limestone quarried and erected by one man over a 28-year time span all in the name of unrequited love.

Born in Latvia in 1887 to a family of stonemasons, the sole engineer and construction muscle behind Coral Castle’s creation, Edward Leedskalnin, was 100 pounds soaking wet and a diminutive 5 feet tall. Although only possessing a grade 4 education, he was fascinated by all things science and history-related, from astronomy to the creation of the Egyptian pyramids and Stonehenge. At the age of 26 Leedskalnin became engaged to Agnes Scuffs, ten years his junior.

The day before the couple were set to exchange their “I do’s” Scuffs suddenly cancelled the caterers and called the whole thing off citing Leedskalnin’s age and his lack of financial stability as her reasons, leaving a forlorn Leedskalnin’s head spinning and his heart crushed. It is said as a result of that devastating moment Leedskalnin heard a calling, one which had him recreating from tons of seemingly immovable stone (at least for a solitary individual) the love he felt so deeply for the girl he often referred to only as his sweet sixteen, Agnes.

Leedskalnin-Ed to most folk-left Scuffs behind in Latvia and busied himself travelling across parts of Texas, California (where he worked in logging camps and mines), and Canada. A bout of tuberculosis found him moving to Florida’s boringly named Florida City in 1918, where he felt the climate was ideal for a quicker recovery.

Part of his therapeutic treatment involved the use of magnets, the utilization of which Leedskalnin attributed to his bouncing back from the condition with such vim and vigour he needed to expend some of that energy by creating what he would eventually call Rock Gate Park (the Coral Castle moniker would not come into play until the 1980s). In just shy of 30 years he engineered and built dozens of stone masterpieces of varying sizes, the average of which was 14 tons.

These included a 25-foot tall, 30 ton telescope aligned to the North Star and a 40-foot high monolith weighing 57,000 pounds and larger than anything found at Stonehenge. Leedskalnin christened it Rock Gate Park after the entranceway’s revolving 8-foot tall, 9 ton gate that could be moved with a gentle push of the pinky finger and still has people marvelling at the engineering brilliance of its design.

Leedskalnin, who had a fascination with all things related to magnetism, reverse magnetism, and how those principles could be used to push the boundaries of physics, is said to have an innate understanding and appreciation of the might of a magnetic field. Were you to ask Ed about it, he might have just handed you one of the three booklets he published over the years on the topic and tag that with a cryptic, “I know the secrets of the people who built the pyramids.” He also claimed to have, “…re-discovered the laws of weight, measurement, and leverage.”

As would become his signature manner of working, the sculptures contained in Rock Gate Park were all constructed by Leedskalnin on his own using simple hand tools after the sun went down and darkness provided a security blanket from any prying eyes that might try to sneak a peak at what he might be creating next or how he managed to move or raise everything into place. When Ed received word that a subdivision was planned nearby he spent the next three years moving everything on the chassis of a Republic truck he converted to a trailer and pulled with a neighbour’s vehicle ten miles to Homestead, Florida.

It was on this 10-acre plot of land that visitors were allowed, with each paying anywhere from 10 to 25 cents (or nothing at all if they couldn’t afford the admission) and given a guided tour from Ed so all could marvel at what he managed to produce from the hand-quarried blocks embedded with fossilized coral and seashells taken from the area just outside the Castle’s 8-foot high stone walls.

Despite the pride he felt in his accomplishments Leedskalnin continued to work in secrecy, with only whispers of the occasional sighting of him in action. Those sightings by locals are more urban legend than anything else, with some claiming to have seen Leedskalnin levitating stones weighing thousands of pounds with a gentle caress of his hand and quietly chanting to them. Reality, never a big fan of fiction, bursts that bubble with an oft-sighted tripod made from telephone poles and rigged with a pulley system, but still has difficulty explaining exactly how the stones were moved and placed with such precision that no mortar or joint compound was ever needed, so tight was the fit.

Leedskalnin lived within the Park’s walls, and called a two-storey stone tower filled with rock furniture and tables his home. One day in December of 1951, Ed walked past a massive sundial that could keep time within two minutes and a 5-ton heart-shaped table with a red blooming ixora as its centrepiece that might have been an undelivered valentine to his lost love, Agnes Scuffs, and left Rock Gate Park for the last time. His last creation was a handwritten sign on the front gate that read ‘Going to the Hospital’. Shortly after, at the age of 64, Edward Leedskalnin passed away in Miami’s Jackson Memorial Hospital from complications of a stroke and kidney infection. Kidney stone, you ask? Well, that’s too cruel a joke to make here.

Some glimpses and theories into how Coral Castle was erected: