The Good and Bad Things to Know About Civet Poop Coffee Any discussion on Kopi Luwak, widely known as some of the most expensive coffee in the world, must start by getting one thing out of the way…Yes! We are talking about coffee beans—that come out of the butt of the Asian palm civet.

Now that we have cleared that up, let’s take a BIG step back and explain how it all works—after all, this is a beverage that just begs you to ask some questions.

Where coffee comes from

When you think of coffee, you might envision shiny brown beans, often bought by the pound, freshly ground; the aroma a fresh brew wafting through the air; or the magical liquid handed to you in a paper cup (for those of us who line up every morning to grab a cuppa joe). But these delicious roasted beans aren’t how coffee appears in nature—there are a few steps between nature and your coffee mug. If you were to run across coffee in nature, it would look more like this: 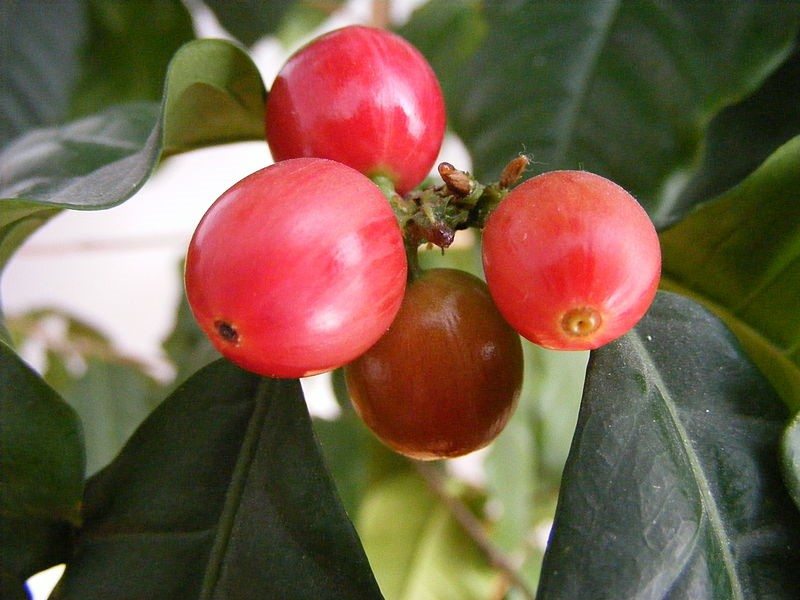 The beans we know and love are harvested from inside these fruits (called coffee cherries) which originated in Arabia. That juicy looking fruit is also where the civet comes into play – they think it looks like a nice snack and that’s where the magic starts.

We know what you’re thinking—a cup of sphincter special doesn’t just seem unappetizing, it seems downright unhygienic. The unsavory part might be true, but any bacteria from the journey through this small mammal is eliminated through the process of cleaning and roasting the beans. So, as distasteful as the production process might seem, the end result is a beverage that is completely safe to drink—even though it might highlight why you never want to know too much about how your food and drink were prepared.

While human beings love coffee beans in a liquid form, after being ground up and having water pressed through them…or perhaps covered in chocolate, civets would rather just snack on the delicious fruit of the berries, pooping out the beans as waste. On the journey through the digestive tract of the civet, the beans are exposed to enzymes that seep into the beans themselves, creating more amino acids, and shortening the peptides. Some studies suggest the resulting coffee is less bitter and it has a distinctly different flavor than other coffees. Judging from the high market demand for civet coffee, and the premium price it commands, that distinctly different flavor seems valued.

The outcome of this journey that some Indonesian coffee cherries take, in the minds of various connoisseurs, is a superior cup of coffee (though detractors dismiss this notion as pure fad or gimmick). Some people believe that the civets themselves only feed on the choicest coffee berries, which improves the final taste. Unsurprisingly, the flavor and rarity of the coffee makes it quite valuable, regularly selling for hundreds of dollars per pound.

So, how did people discover this process? Who decided, “Hmmm, that looks good, let’s grind that up and drink it!”

Who first scooped the coffee poop?

Well, as adorable as palm civets look, this story is not heartwarming, nor does its beginning feature a cute marketing mascot. It does, however, include a bit of human ingenuity in a very unfortunate situation.

It all started with Dutch coffee plantations in Indonesia, in the early 18th century. Even though Indonesia has become one of the largest coffee growing countries in the world—and has an ideal climate for growing coffee—coffee was not native to the area. Indonesia however, was the first place outside of Arabia and Ethiopia where coffee was cultivated; the coffee it exported helped fulfill demand in Europe and continues to supply a caffeine addiction that is still thriving globally today.

Coffee was brought in to Indonesia as a cash crop to be grown by local farmers and plantation workers. At the time, the Dutch had renamed the area as the Dutch East Indies, and as you can probably guess, the newcomers weren’t too concerned as to the opinions of the locals on what they did.

While coffee exports were quite profitable, the life of individual workers and farmers was far less prosperous. Even worse, the workers and farmers on these plantations were prohibited from picking coffee for their own use, so they did not get to sample the fruits of their labors. This is where our story leads to the saddest part of the origin of Kopi Luwak—people forced to dig through poop for the caffeine fix of others. And you thought things were bad in your office when the coffee machine broke down.

As previously promised, there is an element of good old-fashioned human ingenuity to this story as well. The local workers and farmers discovered that the local Asian palm civet (also known as a Luwak—hence the name Kopi Luwak) ate the berries, and then pooped out the partially-digested beans. They were able to take those beans, roast them, and drink the resulting magical coffee without breaking the oppressive rules of the plantation owners…thus proving how far people will go to get a good caffeine fix in the mornings.

This innovative way around the rules spread quickly amongst the local population, and when combined with the fact that the coffee made from civet droppings tasted better, it was a secret that was guaranteed to be leaked eventually to the Dutch plantation owners. Before you knew it, just as has happened many times in the past, this innovative creation of the oppressed minority became the delicious treat of the majority.

The fame of the coffee spread, virtually guaranteeing the need for someone to have a full-time job doing this:

And yes, while the history of Kopi Luwak isn’t heartwarming, you are not alone if you feel better about your own job right now.

The dark side of dark roast

The fame of Kopi Luwak might be gimmicky, but the demand is certainly real. As the success of Starbucks has shown, people do love their coffee. The only problem is the supply—specifically, the problem is with supplying enough coffee to keep up with that demand.

The civets themselves were the limiting factor in this equation. Living wild, they were hard to locate and they ate a variety of foods, making gathering berries from their poop incredibly time consuming (as well as more than a bit disgusting). However, part of the mystique is that the civets themselves were part of the bean selection process. Some people (probably marketers) said that the civets chose only the best and perfectly ripe coffee cherries, making their poop a gold mine of coffee goodness. In the early days of coffee farming, the “civet-processed” beans had an extra advantage—the animal’s digestive systems were actually more thorough at cleaning off all of the traces of fruit than human workers, reducing the chance of the coffee becoming moldy or fermenting during the drying process. The end result was that Kopi Luwak was, historically a better coffee.

You might think that extracting a superior coffee from free-range civets, fed only on a natural diet in the wild, would be enough to end the story right there. But the reliance on the relatively random and varied diet of wild civets made scaling up demand incredibly difficult, time-consuming, and costly.

Unfortunately, there was an easy (and heartbreaking) way around this limitation. Many farmers started keeping the wild civets in cages and force-feeding them coffee cherries in an effort to keep up with the growing thirst for Kopi Luwak from the outside world.

Coffee purists believe that this detracts from the flavor of the coffee brewed because the civets cannot limit their diet to the only the most perfect coffee cherries, but the farmers are usually too busy counting their money to pay attention. The newer, mass-farmed coffee commands the same premium price as its original, harder to create predecessor.

Poor conditions, cramped and unsanitary cages, and an unhealthy diet (restricted to coffee cherries; denied the reptiles, insects and other fruits normally eaten in the wild) have led to serious concerns about animal cruelty in the industry, and farms involved in the production of these coffee beans have also produced an environment of suffering for civets plagued with obesity, various health impacts, and high mortality rates—I suppose there may be a sense of poetic justice that (at least) some of the people drinking civet coffee are high-paid executives who themselves are plagued with obesity, various health impacts, and high mortality rates. A purely coffee diet is healthy for neither humans nor civets.

The high environmental and animal welfare impact of the production process creates a conundrum of sorts for fans of the coffee. Wild civet coffee is virtually non-existent now (or at least the source of coffee labeled as “wild” is impossible to confirm), which makes finding ethical beans a real challenge. In fact, the lack of certification or a governed labeling process means that the premium coffee you see labeled as Kopi Luwak might never have been near a civet, let alone passed through one’s anus.

But along with the disappearance of the original version of the coffee, the scarcity has started to disappear as well. Industrialized civet coffee farms can produce much more of the Kopi Luwak beans than has ever been produced before. Conversely, even if the dollar cost of the coffee might become lower, the environmental cost has become much higher. Essentially, all of the so-called good reasons to drink Kopi Luwak are disappearing, while the reasons not to drink it are increasing.

Tony Wild, the coffee executive largely responsible for bringing Kopi Luwak to the western world has spoken out publicly against drinking the coffee anymore, urging consumers to “cut the crap”.
No certification exists for the wild-gathered civet coffee, so Tony has a valid point—you have no clear idea if you’re getting the ethical coffee or the one that is farmed from fat and miserable civets living in cages.

He says, “When I introduced civet coffee to the UK it was a quirky novelty. Now it’s overpriced, industrialized, cruel—and frequently inauthentic. That’s really hard to stomach.”

After all, if you’re looking for the trendiest and most expensive coffee, Kopi Luwak has been eclipsed by Black Ivory coffee, which can cost more than $500 per pound. Black Ivory coffee is made by feeding coffee cherries to elephants and then processing the elephant poop. This might sound like we are about to repeat the same mistakes we made with civets, but (at least for now) Black Ivory Coffee is made in an ethical and socially responsible way, with funds raised going to support the elephants and the families who care for them. Compared to promoting the suffering of animals, this sounds like a heck of an ethical good deal—if the price tag doesn’t scare you away.

So, if the price or origin of civet coffee hasn’t deterred your taste buds, perhaps the unethical evolution of this gourmet beverage will have quenched your thirst.