The Great Wall of China and Its Amazing List of Wonders The Great Wall of China is an impressive sounding name, but it still doesn’t really do the structure itself or the historical truths and fables behind its construction and existence proper justice.

Here’s the dirt on the world’s longest wall, including why one-third of it has disappeared without a trace.

It is the longest man-made structure in the world

Sitting in at 13,170 miles (21,196 kilometres) in length when it was constructed and wasn’t falling apart, it holds the fengguan for the longest man-made structure on Planet Earth (right now it still sits at a very respectable 5,500 miles or 8,851 kilometres). It still beats out the Grand Canal, the Pan-American Highway and sits pretty close to Dingo Fence, a 5,600km barrier built in the 1880s to help keep a rabbit plague from spreading across Australia. The Great Wall’s backstory is so much more romantic, though.

Estimates are it took anywhere from 1700 to over 2000 years to build the Great Wall. Not to split hairs here either, but it was constructed in various stages and sections. It’s better described as a ‘network’ of walls and structures.

It has also been referred to as the longest cemetery on earth. The main source for the Wall labour came from the military, with over 300,000 soldiers being ordered by the First Emperor of Qin to get their hands dirty and start shovelling. Prisoners, slaves, convicts and male peasants were vital to the construction cause, and if they happened to die while on the job chances were good they were interred in the Wall itself. From that fate was born the tale of Meng Jiangnu, who upon hearing the dreadful news of the death of her beloved husband cried tears in such abundance over the span of three days and three nights parts of the Great Wall collapsed.

The idea behind the Wall looked simple on parchment

Great Wall construction began in 206 B.C, spearheaded by the state of Chu (11th Century BC-223BC). Not to be left out, the Qi, Yan, Wei, Zhao and Qin states all eventually pitched in. Even though the initial strategy behind the construction of the Wall was fairly basic (take walls and fortifications that already existed and join them together to make one great big wall hunk of rock and dirt that was really hard to cross over), it is still considered an insanely ambitious undertaking.

If you were desperate enough you could eat parts of it

Mortar for the Great Wall was made from a paste of sticky rice and slake lime. The sticky rice served a dual purpose feeding the work crews, and the seal its mortar created formed still keeps weeds from being able to grow in parts of the Wall. It’s impossible to say for sure how many bricks were needed to build the Great Wall, but safe estimates put the number at approximately 3,873,000,000.

China and Japan were still fighting on it in the 1930s

From 1933 to 1938 Japan and China were involved in a deadly conflict along the Great Wall, at this point in its history in a rough state of disrepair. It was a series of battles that involved modern artillery like machine guns mixed with traditional sabres alongside bamboo siege ladders, with territories along the Wall’s length switching hands frequently between the two countries. Japan emerged victorious, but to this day the fighting remains overshadowed by the start of World War II. 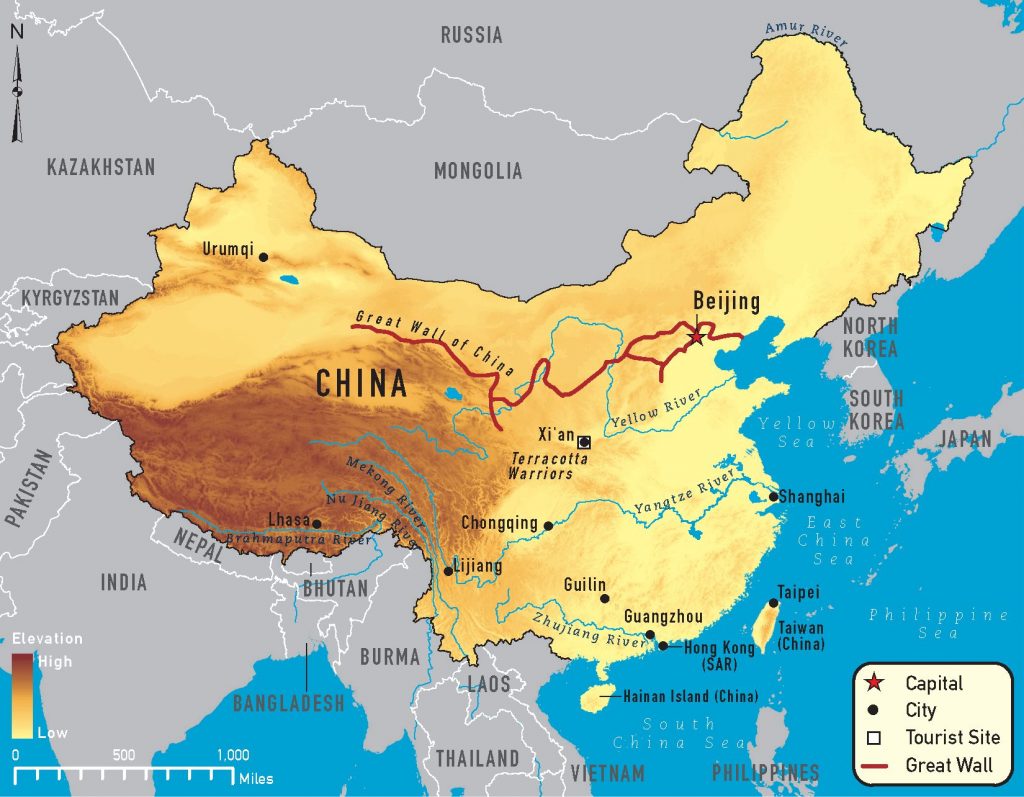 Its geography covers a little bit of everything

The Great Wall’s lowest geographical point can be found at Laolongtou which is at sea level. Those up for the walk can try and make the trek to its highest peak, found at Heita Mountain at an elevation of 5,033 feet (1,534 metres). It begins at China’s Yellow Sea and ends at Lop Lake, crossing deserts, mountains and rivers.

The Badaling area of the Great Wall (originally built in 1505), close to Beijing, became the first section of the Wall to be opened to tourists back in 1957. Due to its proximity to Beijing and the effort put forth to maintain its condition, Badaling Great Wall could be considered a bit of a tourist trap. If you see a world leader or dignitary having a photo op, chances are good it’s being taken on Badaling. Over 10 million people visit the Wall every year.

Once Spring rolls around you can see a lot of people sporting lycra running (or at least briskly walking) on the Wall. The Great Wall Marathon on May 13th bills itself as one of the most challenging runs in the world, and attracts a capacity participant field of 2,500 runners from 60 different countries every year.

The Wall is not in great shape

Only about 8% of the Wall’s original structures remain intact, and 30% what is left continues to naturally erode or be irreparably damaged by humans. That was discovered after an in-depth survey of the Wall done in 2007 had teams of surveyors spreading out across 15 Chinese provinces in order to track every inch of the Wall they could find.

It became a one-stop shopping spot for homebuilders

There would be much more of the Great Wall left if it weren’t for Chairman Mao and the Cultural Revolution of the 1970s. Officials encouraged citizens to treat the Wall like a homeowner buffet and take whatever they could from it to use in the construction or re-building of homes.

Can you or can’t you see it from space?

It can not be seen from space with the naked eye. Or can it? It was the thought the myth of the Great Wall’s visibility from space was officially branded as ‘not possible’ after years of the rumour persisting when a Chinese astronaut finally went on record as saying they couldn’t see the Wall while orbiting the planet. As far back as 1938 stories were growing about even being able to see the Wall from the surface of the Moon (you can’t). What it comes down to as to whether you feel it is visible from space is what your definition of where space actually starts might be, and also having the absolute perfect weather conditions and positioning to catch a glimpse of very small portions of the Wall. So…maybe?

You won’t stumble across dragons attacking it

If you’re hoping Matt Damon’s The Great Wall will be a historically accurate look at the Wall, it’s not. Unless there were actually dragons trying to crush China and the thing wasn’t really built to fend off enemies from along its northern borders.

Without or without Matt and dragons, the Great Wall of China is something to behold. It may not be the the thing of beauty it once was, but isn’t beauty in the eye of the beholder? If you’re ever there, have a lean against a brick made of rice, marvel at the history surrounding you, and spare a thought for the poor astronauts up in space who wish they had the view you do at that moment.