The Sad Tale Behind Central Park’s Destruction of Seneca Village

Jay Moon
Lights Off
This is the story of the African-American Community that died so Central Park could live.

Catherine A. Thompson was an African-American schoolteacher in New York City’s Seneca Village in the 1850s.

Every morning she would stroll past the seventy or so modest homes of her hard-working neighbours, many of whom made up the largest centre of African-American property owners in New York, on her way to African Union Church-one of three churches in the area.

There she taught classes at Colored School No. 3, housed in African Union’s basement. Such was her routine until 1857 when all of Seneca Village’s residents were forced by the city from their property, their homes and buildings plowed under, all to make room for this little thing called Central Park.

When Andrew Williams bought three lots of rural farmland from John and Elizabeth Whitehead (who, unlike most of the white landowners in the region, would sell property to African-Americans) for $125 in 1825 he became the first of many African-American property owners situated in an area located between 82nd and 89th Streets and 7th and 8th Avenues, slightly east of what is now Central Park West.

Less than one week later the African Methodist Episcopal Zion Church purchased six lots of neighbouring land with the intent of them becoming a cemetery. Church trustee and store clerk Epiphany Davis acquired a further 12 lots for $578, and with that the general groundwork was laid for what would become Seneca Village.

Houses, churches and schools are built

These land purchases were significant coming on the cusp of the enslaved population of New York becoming emancipated in 1827, almost 40 years before the 13th Amendment was passed and slavery was officially abolished across America. (The emancipation process in New York was not exactly a cut and dry task.

Within a few years of these purchases nine homes had been built in Seneca Village, situated in what would be considered a remote area far from the ever-growing squalor of lower Manhattan, where the burgeoning collection of African-American and Irish residents were cramming themselves into converted warehouses or stables and multiple families were often forced to live together in one-room dilapidated sheds.

As it grew in population and poverty and crime spread with it, lower Manhattan quickly made it to the tops of many lists for places you’d rather not be for any extended period of time. 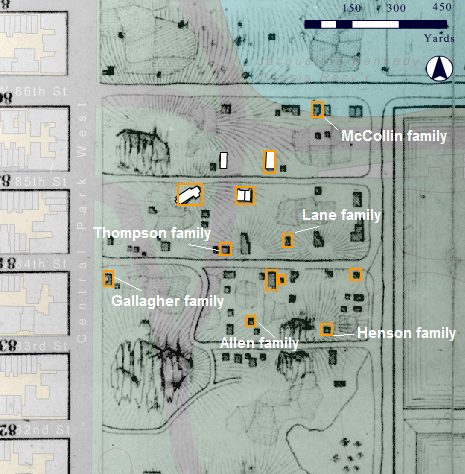 A community, but still second-class citizens

Life around Seneca Village, with its location adjacent to the Hudson River and an ample supply of drinking water available to it thanks to a freshwater spring situated nearby, was significantly better than what you could find in other parts of the ever-expanding city.

For its African-American residents, though, it was still a constant uphill battle for the basic rights enjoyed by the city’s white citizens. In 1821, New York State ruled that in order to vote an African-America male (with women not yet having the right) had to own at least $250 in property, something not required of white voters.

By the time 1855 rolled around Seneca Village was a fully integrated community, with immigrants from Germany and Ireland making up 30% of the population. The people of the village worshipped together at All Angels’ Church, and their dead were buried in neighbouring graves in All Angels’ cemetery.

Despite this relative harmonious lifestyle in 1857 Seneca Village was ordered by the New York State legislature to be torn down and its 264 residents relocated.

Was it because the city was wary of Seneca Village’s possible involvement in the Underground Railroad? Or were the politicians of the era (some of whom were still uncomfortable African-Americans owning land and businesses) just a little too uncomfortable with New Yorkers of different ethnic backgrounds getting along relatively well together and making the borderline segregated segments of the city look as Stone Age as they actually were with regards to basic human rights?

No, it was to appease the demands of affluent New York merchants and landowners who wanted some green space for they and their families to enjoy, away from the muck and mire that was lower Manhattan-at this point a decrepit cesspool of smoke-billowing manufacturing hubs overcrowded with drunken residents of every creed and colour beating one another senseless surrounded by the stench of human and animal waste splattered along barely cobblestoned roads.

Using the rules of ‘eminent domain’ the New York legislature authorized that all Seneca Village residents be compensated a price it felt was fair for their property and ordered off their land. Protests were filed in New York State Supreme Court over the amount paid out to Village landowners, but these objections went nowhere.

With the destruction of Seneca Village, New York’s Central Park was born. As ground-breaking as Seneca Village was for its time, it was barely a ghost of a memory for almost 150 years after its demise.

It wasn’t until a group called The Seneca Village Project began pressuring the city of New York in 2001 to acknowledge the site and allow excavation of the area in 2011 to study what history might have been plowed under the green grass of Central Park that Seneca Village’s existence became known to many New Yorkers.

With its 843 acres of public land, Central Park has only a small plaque in recognition of Seneca Village, recognizing it as “Manhattan’s first prominent community of African American property owners.”