Alex Conde
Lights Off
It was thought rats from a sinking ship wiped out one of Earth's weirdest bugs, the tree lobster. Turns out it wasn't extinct - just hiding.

It was thought rats from a sinking ship had wiped out one of Earth’s weirdest bugs, the tree lobster. Turns out it wasn’t extinct – just hiding.

Better known as the Lord Howe Island stick insect or Dryococelus australis, this skinny creepy-crawly is not actually a crustacean, nor would you find it on a menu at Red Lobster—great biscuits by the way.

As you might have guessed from the name, Lord Howe Island stick instincts were originally from Lord Howe Island, which is located between Australia and New Zealand. The nocturnal stick insects were very common on the island, and they apparently made for excellent fishing bait. Measuring up to 6 inches (15 centimeters) in length, these critters couldn’t fly but they could run very quickly.

Unfortunately, in 1918 the supply ship SS Makambo ran aground off the coast of Lord Howe Island for nine days. The ship was repaired and refloated but the delay near the island allowed black rats (common stowaways on ships of the time) to escape the boat, causing an ecological disaster as a result; not the first time rats have caused very bad things to happen—we’re looking at you black plague.

Invasive rats have had an awe-inspiring impact on a number of islands. Rats in general, and black rats in particular, thrive on tropical islands. The warm climate typically comes with plentiful food and permits year-round breeding. Unfortunately, while the islands are good for black rats, the rats are horrible for these islands. Black rats have been credited with causing the extinction of birds and other native species and are suspected to have brought several other species to extinction before we even discovered them. The rats’ stay on Lord Howe Island was no different than that on other islands. Apparently, black rats found the stick bugs to be delicious, and they went after them like it was an all you can eat buffet. By the time the SS Makambo left the island, a death sentence had been passed not just for the stick instinct, but also the Lord Howe thrush, Lord Howe gerygone and a number of other seabirds.

By 1960, the insects were considered to be extinct, with none of them having been sighted since the 1920s. However, the humble tree lobsters raised their middle finger (or whatever the insect equivalent is) to fate, and survived despite all predictions to the contrary.

Ball’s Pyramid was formed 6.4 million years ago and is the tallest volcanic stack in the world. Basically, it’s big, imposing, and not particularly friendly. It’s the kind of place you might go to set up a supervillain hideout, or perhaps if you wanted to hide away from an unkind civilization and hungry rats—do you see where this story might be headed?

Even though it was discovered in 1788, the peak of Ball’s Pyramid remained unclimbed until the 1960s, when several expeditions attempted to reach the summit (perhaps this is another result of those crazy sixties). While the peak was conquered in 1965, it was a failed 1964 expedition led by Australian Dick Smith that made an amazing discovery—a dead stick insect on Ball’s Pyramid. The insect was photographed, but no live specimens were found. An additional discovery had to await another day.

This discovery began a four-decade-long game of hide and seek with the crafty tree lobster, a game at which they were surprisingly good. Expeditions in later years discovered more examples of dead stick insects, but no live specimens were found. Surprisingly, a 2001 expedition discovered droppings under a bush—one of the few plants on the otherwise rocky island.

The explorers knew that the poop had to come from somewhere (this is a game mothers have been playing for thousands of years), so they came up with a plan. Knowing that the stick insects were nocturnal, two scientists decided to come back at night—which meant they had to climb 500 feet of rock, in the dark, with just their cameras and flashlights. It just goes to show that entomologists (the scientists who study insects) are far more badass than they ever get credit for.

A population of 20-30 individual stick insects was identified, making it the rarest insect in the world. They were literally clinging to the edge of extinction. No one knows how they got to the island; perhaps they were dropped by a passing bird (they could not have flown themselves as they are the heaviest flightless stick insect in the world). The survival of the species might have come down to the fact that the insects can reproduce without the presence of males, in a process known as parthogenesis (which in an era of Tinder sounds outright tempting, so perhaps those Tree Lobsters were on to something). However, Ball’s Pyramid couldn’t be defined as “hospitable” by any stretch of the imagination. The survival of the stick insects can’t be considered as anything other than a miracle.

As if the poor accommodation and lack of a mating pool didn’t complicate things enough, these insects only had a selection of one species of shrub to dine on, making their care and feeding even more difficult. After much debate (both scientific and political), it was decided that four of the insects—a whopping one-sixth of the surviving population—should be taken off Ball’s Pyramid for breeding, to establish a protected population.

But the fun didn’t end there—when the scientists came back to Ball’s Pyramid to find the four lucky insects, a portion of the mountain side that housed the bush where the tree lobsters were had been knocked down by a rock slide. Horrified, the scientists thought the tree lobsters had been found only to lose them again. But these insects weren’t having any of that. They hadn’t survived decades on the side of an inhospitable mountain only to be lost to landslide.

The stick bugs had lived through rats, humans, and everything else the world threw at them, and no landslide was going to take them out…they had survived. The entomologists found and took their four specimens away as to avoid any future extinction events—or so they hoped.

As you can imagine, there were a lot of entomologists purchasing antiperspirant and anti-anxiety meds at this point, and it only got worse. One pair of the insects quickly died. The others, named Adam and Eve, weren’t doing much better. Eve was sick, but since no one had seen these bugs for over 70 years, they had no idea how to help them. It looked as if the four tree lobsters had been saved from extinction one way, only to face it from another direction. 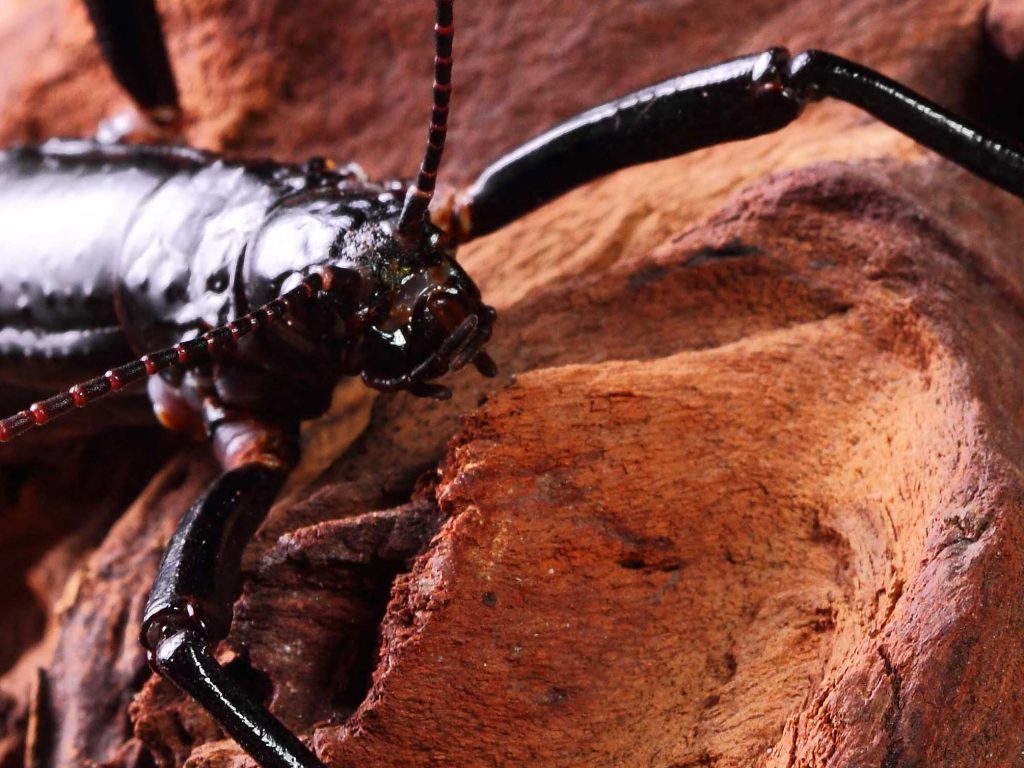 Thankfully, this story has a happy ending. Adam and Eve were in the hands of the Melbourne Zoo, specifically under the care of Patrick Honan, a member of the zoo’s invertebrate conservation breeding group. Patrick, worked every night for a month (as the insects are nocturnal) to try and cure Eve. Finally, he found success when he concocted a mixture that included sap and nectar which seemed to do the trick. Eve’s condition turned around remarkably quickly, restoring hope that this breeding program might be able to save the species.

Tragedy narrowly avoided, the staff at the Melbourne Zoo went on to successfully breed the pair. There are now hundreds of adults and thousands upon thousands of eggs. Interestingly enough, the staff at the zoo discovered that the tree lobsters appear to pair off in couples which is an unusual behaviour for insects to display. Males and females even sleep protectively intertwined.

The success at the Melbourne Zoo has helped to secure the continued survival of these
fascinating creatures, and has provided populations that have been shared with other zoos and research institutions.

EEggs have been flown to Bristol, San Diego and Toronto, so that separate populations could be established, further solidifying the safety of this species. Having come so very close to losing the tree lobsters once, we’re not going to risk it happening a second time.

Speaking with NPR, Australian Zookeeper Rohan Cleave said, “It’s a very romantic story, in that there’s always that hope that one day, they may go home.”

Home coming might have to wait though, because the very thing that led to the near extinction of the tree lobsters in the first place is still present on Lord Howe Island—the rats.
For the stick bugs to go home, the invading black rats would first need to be exterminated. This is an issue of contention for some residents of Lord Howe Island. The current plan to exterminate the rats involves dropping 42 tonnes of poisoned cereal on the island, which seems extreme, even for an animal known for causing extinctions. Rats aren’t all bad—haven’t you seen Ratatouille?

Some residents worry about the overall impact of the poison on the island, and others aren’t giant fans of the stick bugs; and while they are amazing creatures and their survival is impressive, these incredible tree lobsters aren’t exactly cuddly teddy bears. Either way, it’s unlikely you will see stick bugs on Lord Howe Island anytime soon.

For now the Stick Bugs are in a sort of Jail Cell, on the island but not integrated yet. Even though the stick insects were originally native to the island, perhaps we’ve learned a bit about mucking about with ecologies and biodiversity over the years and are now choosing not to rush in and make decisions that could potentially lead to more mistakes.

While the Lord Howe Island stick insect might not be all that much to look at, it’s legacy carries a truth that speaks to the ability of humanity to endanger the environment, but also of what we can do in its preservation. It also raises a shred of hope that other species considered extinct might still survive in other locations that we have yet to discover, and that the incredible damage we have caused upon this earth can perhaps be fixed with a bit of modern ingenuity.

Miracles are tragically rare when it comes to the finding of species we believe are lost, but hope is a powerful thing; we are often finding new species and discoveries right where we least expect them. So, keep looking, and maybe hope can meet science somewhere in the middle. Perhaps we can all learn a lesson in perseverance from the noble tree lobster.