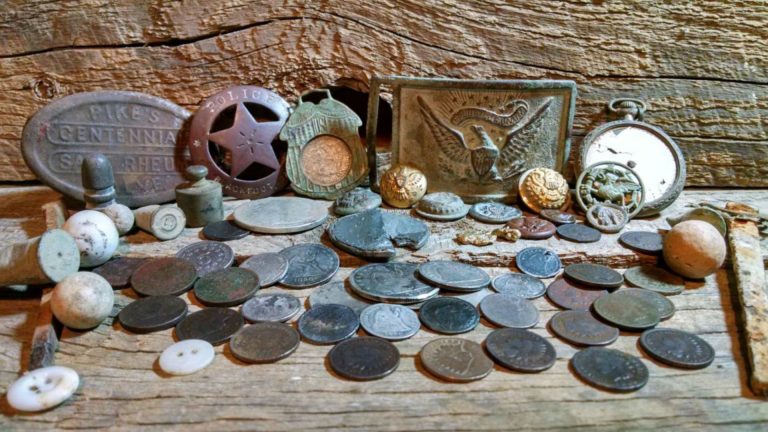 Ever since Alexander Graham Bell attempted (unsuccessfully) to use a primitive metal detector in 1881 to locate an assassin's bullet imbedded in the chest of the United States’ 20th president James A. Garfield, the folk who this day and age prefer they be called detectorists always seem to be up for a challenge.

Those that wield the ever-advancing detector technology purely as a hobby are responsible for some astounding finds over the years, not to mention some odd ones as well. While it’s debatable as to whether it’s the thrill of the hunt or the actual discovery of a one-of-a-kind item that stokes the fire for amateur metal detector owners, they certainly know there’s no harm in following one simple mantra: when in doubt, dig.

Gold is always in fashion.

In 1989, an unnamed individual who we’ll just call Ol’ Prospector bought themselves a metal detector at their local Radio Shack and headed into Mexico’s Sonoran Desert. Sweating through temperatures as high as 125 degrees fahrenheit (almost 52 degrees celsius) and a few dozen false alarms (mostly bullets) they came across the motherload of gold finds-a nugget weighing in at 389.4 troy ounces (just under 12 kilograms or 26.5 pounds) in the shape of footwear.

It was christened the Boot of Cortez after the closest body of water it was found to, Mexico’s Sea of Cortez. It remains the largest gold nugget still in existence found in the Western Hemisphere, and in 2008 sold at auction for $1,553,000.

In 2010 Christies Auction House in London, England, had the task of piecing together an unnamed 20-something year-old detectorist’s find of 67 fragments that, when restored, formed a late first-century ceremonial Roman cavalry helmet. Named after the northwestern England village where it was discovered, the griffin-adorned Crosby Garrett helmet was buried approximately 10 inches (25 centimetres) below the surface of a field.

After undergoing an x-ray fluorescence spectrometry during its restoration process it was found to be constructed primarily of copper, tin, and lead with trace amounts of zinc. The helmet was the centre of a six-way bidding battle in November of 2010, finally selling for almost $3.6 million-nearly eight times its estimated value.

Does this bronze armour make me look fat?

New York stockbroker Morton Leventhal was on the prowl for ancient coins in 1975 near the Jordan River in Israel when his metal detector began to emit a pulsating tone indicating he had possibly found something. Instead of coins, Leventhal had stumbled upon a second century bronze statue of the Roman Emperor Hadrian. The well-preserved statue had Hadrian clad in armour, the breastplate of which featured six nude warriors in battle.

It was Hadrian’s face on already discovered coins and the statue’s uniquely shaped ear lobe (a side effect of the heart condition Hadrian was eventually killed by) that scholars recognized and used to help them identify Leventhal’s find, currently housed in the Israel Museum in Jerusalem.

The fine line between earth rubble and an outer space rock.

Not everything found with a metal detector has to be all shine and sparkles to get some attention. In 2012, 13-year old New Mexico scientist-in-the-making Jansen Lyons came across a 2-pound chunk of rock that turned out to be a 10,000 year-old meteorite of the L6 ordinary chondrite variety. The discovery was made at an undisclosed location near Lyons’ Rio Rancho home using a homemade metal detector built by his grandfather, and thanks to an infatuation with meteorites that for several years had him reading every book he could find on the subject was instantly recognized by the teen as more than just your average earthly rubble.

Lyons’ suspicions were later confirmed by experts from the University of New Mexico’s Institute of Meteoritics as fact, and although the meteorite’s monetary value is only somewhere in the $1000-$2000 range the fuel its finding has provided one young mind to go out and discover more hidden other-wordly artifacts is hard to put a price on.

Detroit resident Perry Andrews was a man who sounds like the type of fella that lived life by the oft-used ‘go big or stay home’ credo. Why else would anyone, after offering up their classic light-green 1913 Model T Ford to an unappreciative son-in-law in 1926 who wanted to convert it to a hot-rod, instead bury it under an apple tree rather than see its pristine beauty tampered with?

In 1966 a Detroit radio DJ got wind of the story and organized the ‘Big Dig’ recovery mission, led by metal detector-wielding volunteers. Andrews took three days to bury his 4-wheeled love, and it took Detroit detectorists two days to bring what was left of the car back to the surface 40 years later so it could eventually be restored to its original glory.