Space Debris: Earth’s Orbit is Turning Into a Junk Minefield

Jay Moon
Lights Off
Hypothetically, could one copy of the 2013 film Gravity bring mankind, with its dependence on all things orbiting in the black abyss above us that is space, to its knees? How much damage could a Sandra Bullock and George Clooney movie do mixed in with a bunch of meteoroids? And why should we even be worried? Outer space is huge, right?

The International Space Station has contributed to orbital debris and had one of its windows damaged by it. Photo: NASAOf course, outer space is massive. But in order to get to it spacecraft and satellites first have to at least breach low Earth orbit (LEO), a feat that over time is becoming increasingly more akin to blasting your way through a trash minefield than anything else. There’s a lot of man-made junk circling Planet Earth on an endless loop and mingling with those meteoroids as a result of our quest to explore our universe.

Encompassing minuscule specks smaller than a paint chip to entire abandoned spacecraft and satellites, from the moment Sputnik 1 was launched on October 4, 1957, until now every mission towards the heavens has left its own orbital trash calling card. One such example? 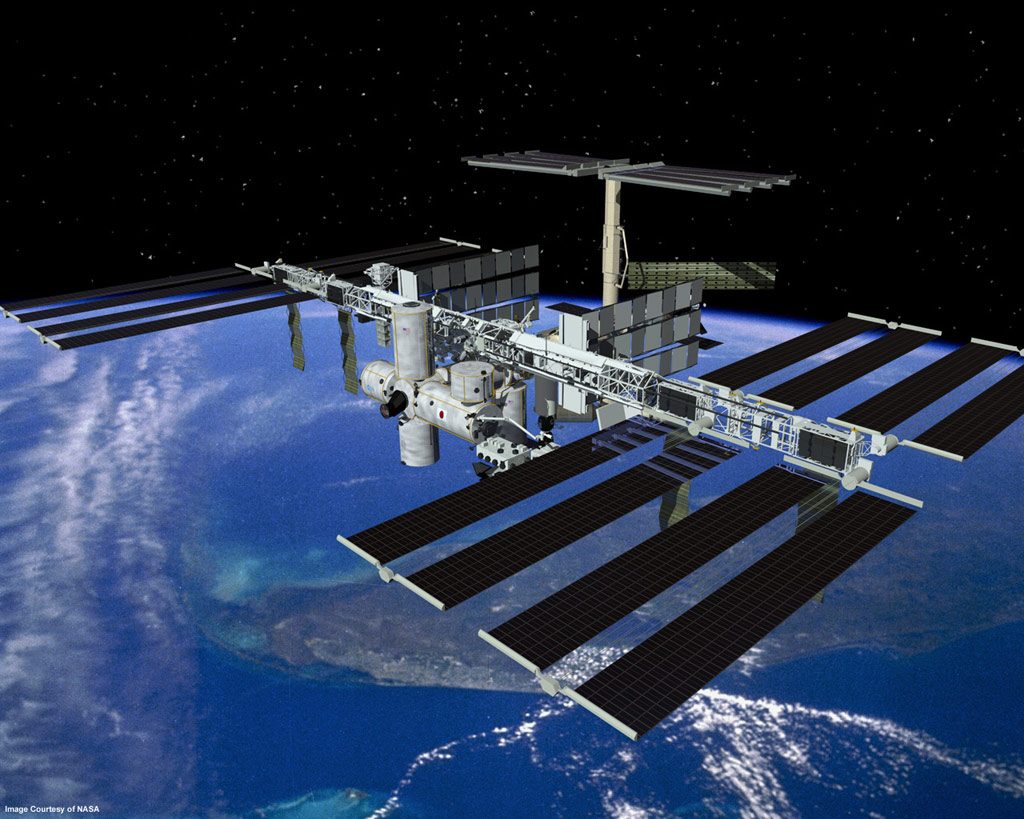 An astronaut’s tool bag worth $100,000 (US) dropped during a 2008 spacewalk repair mission on the International Space Station. As of 2011 mankind was responsible for dumping about 2 million kilograms (4.4 million pounds) worth of space rubbish.

Here’s the problem when that sort of thing occurs regularly over the span of 50 years: many of the odds and ends encircling Earth can zip along at upwards of 17,500mph (28,163kph), a substantial enough speed that even the smallest of particles can cause catastrophic damage should they happen to cross paths with a satellite, space shuttle, or even the aforementioned International Space Station.

The United States Space Surveillance Network does their best to track and map space debris, and they estimate there are at least 500,000 pieces of space dregs whirling about that are at least the size of a marble. On past space shuttle missions, windows have been damaged by particles much smaller than that.

When the Long Duration Exposure Facility (LDEF) was inspected by NASA upon its completion of five-and-a-half years in low Earth orbit (LEO) it found the bus-sized spacecraft had been dinged and dented over 20,000 times by space debris. When the Cosmos-2251 military communications satellite and the Iridium 33 commercial satellite collided in 2009 the result was 2,000 more pieces of trackable rubble, so just as they do on Earth there’s always a chance accidents could happen in space.

They would actually be inevitable, or so says the man whose mind came up with the Kessler Syndrome, an almost 40-year old mathematical prediction whose possible worst-case scenario outcome is becoming a major concern for space agencies around the globe.

In 1978, NASA astrophysicist Donald J. Kessler put forth his theory (and one you may have seen played out in Gravity) that larger objects that collide in low Earth orbit not only create more debris, but that those newly formed shards will continue on and eventually crash into other objects due to the already substantial density of space garbage piling up.

What is being created in orbit every time a collision such as this occurs is an ever-growing shrapnel stew that could keep expanding regardless if there are any other large mass ingredients added to the pot. Avoidance of random collisions would become nearly impossible.

Let’s say in a congratulatory ‘You won a lot of Oscars!’ mood NASA completely ignores Kessler’s math and launches one hundred copies of Gravity into space as a welcome basket to alien beings should they ever venture this way and need an award-winning introduction to mankind. Then, in an unfortunate accident due to a pre-launch equipment oversight caused by a distracted ground crew member reminiscing about George Clooney’s squinting gaze from a key scene in the movie, the unmanned vessel carrying the DVDs goes ‘ka-boom!’ and splinters in LEO.

Chunks of spacecraft and one hundred copies of Gravity are unleashed into the blackness. One DVD crashes into another. That five-mile a second impact causes dozens of pieces of plastic and DVD bits to carry on along with scraps of malfunctioning engines and heat shields, with each one of those fragments colliding with another DVD, or meteoroid, or possibly any of the 4,000 satellites (working or otherwise) cluttering the orbit around Earth. It becomes a very dangerous physical version of, “And they told two friends, and so on, and so on…”

The more debris left behind after every mission to space the greater the potential for disaster will be for future manned or unmanned space exploration and satellite missions-satellites that are vital for much of the communication systems we depend heavily on here on Earth. Say goodbye to the internet, your cell phone, your long-range weather forecast.

Earthlings will be able to see the moon, they just won’t ever be able to visit it again (and maybe clean the place up a little) thanks to the risk of anything being rocketed from Earth having to pass through a field of space debris trapped in a perpetual orbital cycle of shrapnel-birthing cascading collisions.